Posted on 30 January 2013 by Propagandum 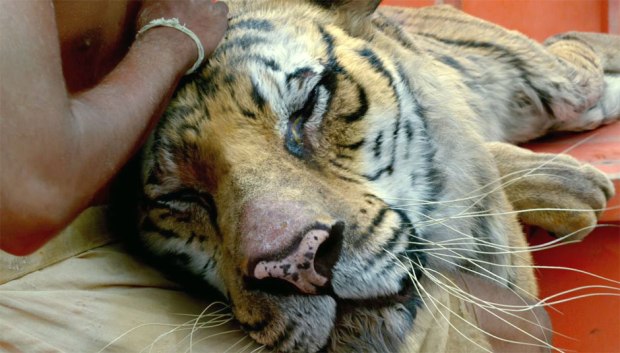 The tiger in Life of Pi eats a whole film. In other words, our wish to believe in stories is so strong we gobble them up whether they’re true or not. Those who think of themselves as hard-headed realists probably prefer Pi’s brutal ‘outer’ story – though of course any conception of ‘realism’ in fiction is self-evidently unrealistic. If I may not too egocentrically continue from my previous post, for me the fictive tiger is the living heart of the film. Unbelievably, it’s computer-generated; indeed, the whole film is illusory, but it ultimately endorses human imagination and empathy as the way we make what we conceive to be true.

The film asks the God question, but leaves it open; the openness is the answer. Like one of Douglas R. Hofstadter’s Gödelian strange loops, the meaning of a system (whether the film or the universe) cannot be internally derived, but must be extrinsically generated. The major artistic success of the film, for me, is the deliberate design/framing of the storytelling to make the design visible. What we make of that – film or universe – is our own cognitive replication of the creation, or our God-like choice. 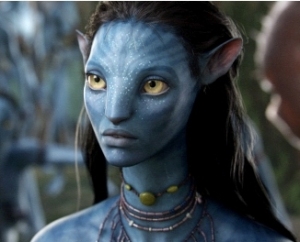 Next: blue quasi-tigers – or, as Wikipedia puts it, 10-foot tall, blue-skinned, sapient humanoids. For a deeper understanding of Ang Lee’s film, how does it compare with James Cameron’s 2009 Avatar? In this movie, the crushing reality for main character Corporal Jake Sully is that severe wounds during military combat lead to the amputation of his legs; he finds freedom when his mind is uploaded into his (fully mobile) avatar in a new, strange and beautiful world. In Life of Pi the brutal story told to (invented for?) the insurance investigators frames but is subservient to the beautiful images of Pi’s compelling and richly imaginative tiger story. In Avatar, Jake is captivated by the beauty of the ‘natural’ (although of course computer-generated) world his avatar finds; at the end he stays both in this alien world and his lithesome blue-tiger-body. And we the audience in the cinema projectively replicate his complete immersion in an imagined world.

Of course the harsh ‘realities’ of severe disability and human predatory/colonialist exploitation are imagined too: it’s a movie. Our projective identifications remain intact – as with all films (except Life of Pi) until the final narratological violence of the rolling credits and the lights coming up on the banality of spilled popcorn and monster Coke cups littering garish moviehouse carpets. In Life of Pi the smashing of illusions happens within the film and three times, #1 when the tiger slopes off into the Mexican jungle without a second glance, #2 with the brutal story in the dull hospital, and #3 in the ordinary flat in Canada. ‘What I tell you three times,’ says the Bellman in Lewis Carroll’s own menacing sea story, The Hunting of the Snark, ‘must be true.’ 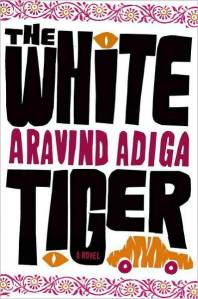 8/10. Tiger visual references have intriguingly shrunk to the eyes above/below the i’s. Balram’s taxi has got tiger stripes but they are orange. Nice Indian references in the ornamental borders without being too crass. The lively bold lettering sells well from thumbnail images on the internet. Image from http://bestsellers.about.com/od/
readingrecommendations/tp/
india_books.htm

The White Tiger, the prizewinning and bestselling 2008 novel by Aravind Adiga, is an unusual dig into the ever-rich seam of storytelling about the subcontinent of India. This time, according to The New York Times, ‘Mr. Adiga said his book was an “attempt to catch the voice of the men you meet as you travel through India – the voice of the colossal underclass.” “This voice was not captured,” he added, “and I wanted to do so without sentimentality or portraying them as mirthless humorless weaklings as they are usually.”’ The lowly caste and sycophantic disposition of the taxi-driving protagonist Balram Halwai initially seem to preclude connection with the killer instinct of the animal in the title … or do they?

Certainly the book is important in our symbolic order for reflecting new and renegotiated power relations between the former colonizeds and the former colonizers. The white tiger, symbolically speaking, stands for the economic and cultural dynamism of the ‘colossal underclass’ and country that Professor Lord Martin Rees, former President of the Royal Society, has predicted will be the intellectual and scientific centre of the world within 50 years.

In Life of Pi the tiger is not so specifically techno-economic – though the film does indeed hint at the strength and impact of Indian modernization and cultural/economic expansion. Mostly, though, the tiger is more like the psychoanalytical conception of the Other, the repressed and refused (in the West) dark side of human energy, instinct and oblivion, in conflict with civilization; it is unassimilable into language or rational understanding, but it is there, too, in us all. Pi’s struggle and accommodation with this powerful animal – whose life-force, he later realizes, keeps him alive – is an impressive negotiation we can trace back in the symbolic world to other Others, for example Herman Melville’s Moby Dick and, from popular culture, Stephen Spielberg’s Jaws. I’m also thinking of J. M. Barrie’s Peter Pan, where the evil Captain Hook plays out a very different outcome in his uneasy relationship with the crocodile.

It is tiger as Other that William Blake writes about in his famous poem in the Songs of Innocence and Experience (1789–94): ‘Tyger Tyger, burning bright …’. Please remember the speaker of ‘The Tyger’ is not necessarily the poet, but a voice of ‘experience’. The voice could be just one of the poet’s many voices – the poet’s framing of innocence and experience as ‘two contrary states of the Human Soul’ suggests both he the writer and we the reader feel/believe multiple and different things at the same time.

The voice in the poem is a particular kind of adult voice, perceptive and disillusioned, though perhaps, Blake suggests, they simply have different and adult kinds of illusion. I was thinking of this kind of person when I read the NY Times review of Life of Pi I started with in my previous post. He says:

the narrative frame that surrounds these lovely pictures complicates and undermines them. The novelist and the older Pi are eager to impose interpretations on the tale of the boy and the beast, but also committed to keeping those interpretations as vague and general as possible. And also, more disturbingly, to repress the darker implications of the story, as if the presence of cruelty and senseless death might be too much for anyone to handle.

I suggest this kind of adult disillusion is actually adult ingenuousness. I repeat: it’s a movie. No animals – or people – were injured in the making of this film. Besides, no work of art can be about everything – why should it, and how can it? And anyway, when we willingly suspend our disbelief in the implausible we extend our capacity for empathy and imagination.

For comparison with the attitude of the reviewer, here are stanzas 3 to 5 of Blake’s poem. The speaker looks at a tiger in awe but is caged in by their relentlessly anthropocentric metaphors; he (surely male?) struggles to see anything more than his own terror – as if the tiger’s sole object of attention is him. In the fourth stanza (‘What the hammer? …’) notice the obsessional metaphors of the manufacturing processes in the early Industrial Revolution; in contemporary terms this is like thinking about Life of Pi in terms of the algorithms for the CGI rendering of hair. Is there any projective empathy here, outside all the egotism and self-centredness, for the Otherness of the tiger?

And what shoulder, & what art,
Could twist the sinews of thy heart?
And when thy heart began to beat,
What dread hand? & what dread feet?

What the hammer? what the chain,
In what furnace was thy brain?
What the anvil? what dread grasp,
Dare its deadly terrors clasp?

When the stars threw down their spears
And water’d heaven with their tears:
Did he smile his work to see?
Did he who made the Lamb make thee?

In the face of such closed Dawkins-style scepticism and instrumentalism the speaker finds it impossible to see the utter tigerishness of the tiger, its innocence, that is such a fine achievement in Life of Pi. There is wonder and a sense of awe/dread in the speaker’s voice, but also a sense that this person simply cannot understand a world outside themselves.

What’s left? To borrow another Blake quote, ‘The tigers of wrath are wiser than the horses of instruction’, which I take to mean that tigers in stories – particularly fiction – have more life and energy than the horses of exegesis and interpretation. Which sounds like a good place to stop.

I’ve been working in book publishing for over 30 years – an industry now in rapid transition. So I’m interested in foundational principles for media, writing and language – what lessons can we learn for how we can and should communicate? How can we make sense of media/technology? Can we transfer some skills from the old to the new? I hope to share (every week-ish) some things I think are wonderful, rich and important. I write longish posts because our complex and fascinating world cannot be reduced to soundbites. Please let me know what you think – contact me at david@propagandum.com
View all posts by Propagandum →
This entry was posted in Film criticism, Media analysis and tagged Aravind Adiga, Avatar, Cats, CGI, Film criticism, Film review, Life of Pi, Realism, Richard Dawkins, The Tyger, White Tiger, William Blake. Bookmark the permalink.