Life of Pi – a film review in six or seven facts

Posted on 17 January 2013 by Propagandum

What does this film mean? Does it, as its hero Pi Patel says at the beginning, ‘make [us] believe in God’?

This post contains (as they say) spoilers, so if you don’t want to know what happens, please don’t read it …

An establishing shot (http://en.wikipedia.org/wiki/Establishing_shot) for this review of Life of Pi … Image from http://www.flickr.com/photos/lifeofpimovie/

Fact #1: The story tells us a story about the telling of stories. This post is my story about Ang Lee’s film of Yann Martel’s book, which tells the story of a writer who writes a book about the story of a man who tells two very different stories about surviving a shipwreck. The giddy regress of mirrors of mirrors (‘mise en abyme’) makes the perceptive and critical reviewer in The New York Times reel: ‘The movie invites you to believe in all kinds of marvelous things, but it also may cause you to doubt what you see with your own eyes – or even to wonder if, in the end, you have seen anything at all.’

This is good because it gets near the truth. This is bad because the film aims at an ambiguity of believing/doubting that is clearly and completely deliberate. How can a first-class reviewer miss this?

So, moving on to the solid ground of Fact #2: Art always conceals artifice. Art hides its own making. Media contain other media, and the human drive to make sense is so strong that media seem to disappear. What then do we see? We (to invert Blake) behold what we become. For us, narcissus (to quote McLuhan) is narcosis – in other words, when we don’t notice we are reflected back to us in media we’re no longer fully awake or alive. We can extend this point to a God-bothering quote from William Blake, in the author’s own original illustrated/hand-coloured/engraved/hand-lettered form:

William Blake, Plate 11 from The Marriage of Heaven and Hell. Image from http://www.fitzmuseum.cam.ac.uk/explorer/index.php?oid=598

On to Fact #3: Repeated figures or tropes are signs of a maker’s craft and intent. They are evidence of intelligent design. I am talking about the maker of the film rather than a Maker, but the story plays with the parallels between creating and the Creation. The name of the ship carrying the animals from Pondicherry is Tsimtsum, a Kabbalistic term denoting divine cosmogonic retraction or constriction, in other words the formation of apparently empty space for the possibility of Creation/creation. In the film the metaphor is probably playful rather than earnest – the ship sinks. Perhaps the next phase – HaKelim (the making of vessels for holding the Creation) – would have been a better name for the ship. The subsequent Shevirat (shattering – the vessels were not strong enough) clearly connects with the sinking of the ship, suffering and disaster in the real world, and the difficulties of meaning in language/works of art. Indeed, Pi, the tiger, the filmmaker, the writer and we too are perhaps at the next stage, Tikkun: the repair of brokenness. We are all, metaphorically, the film suggests, in the same boat.

Let’s extend Fact #3 with Fact #4: Eating is one of the film’s central metaphors. During the film the tiger eats, in order, its hunter’s name (Richard Parker), a goat, a hyena, the (usable space on the) lifeboat, tuna, flying fish, meerkats, Pi’s heart out, and, finally, the film itself. (I’m thinking of when Jack Nicholson’s Joker stole the whole 1989 Batman movie.) Here I’m tempted to describe the tiger’s performance as Oscar-winning, except it’s an animal, er … I mean it’s a computer animation … Isn’t it fascinating we might even begin to think of it as a real creature? Doesn’t this mean something interesting and important – I don’t just mean the abundant talents of the Rhythm and Hues SFX team, but inside our heads?

The first story Pi remembers from his childhood (he tells the writer) is of the Hindu supreme deity Krishna, ‘who had become a human child out of sport, without any loss of His divine powers’. Krishna’s mother Yashoda sees him eating from the ground and tells him off for eating dirt. She insists on looking into his mouth, and then (as Vanamali beautifully puts it):

She bent forward to peer more closely and lo! she felt herself to be whirling in space, lost in time, for inside the baby mouth was seen the whole universe of moving and unmoving creation, the earth and its mountains and oceans, the moon and the stars, and all the planets and regions. She was wonderstruck to see the land of Vraja and the village of Gokula, herself standing there with the child Krishna beside her with a wide-open mouth, and within that mouth another universe, and so on and on and on.

Let’s, then, not be too literal about eating. May we try to broaden our conception of it? In a food chain of narratives and explanations each story is eaten by a bigger story. In another storytelling chain the bread and wine of the Christian rite of Communion is, in its own terms, disturbingly cannibalistic, but broadened it becomes an act of understanding, generative of life in body and spirit.

Comments in the blogosphere suggest most of us are hung up on the cannibalism meta-story. Its overt plausibility, bitterness and unacceptability doesn’t therefore mean it is true. Yes, people often and understandably lie when they think something is too harsh or cruel to say or even think. But does that mean cruel stories are more true than the beautiful and remarkable scenes we have watched? The images for Pi’s alternative story are stripped back to banal shots of insurance investigators and talking heads in a drab hospital in Mexico. Is this the ‘real’ world? To those who think that plain truth is truer than beautiful truth I offer Fact #5: This film is a work of fiction. It almost seems absurd to think we can debate which of its stories is ‘true’. But to see is to believe. If we see and fully digest the tiger story, what we feel and understand is true. If we are arguing about it, and writing/reading about it, it has become real for us. 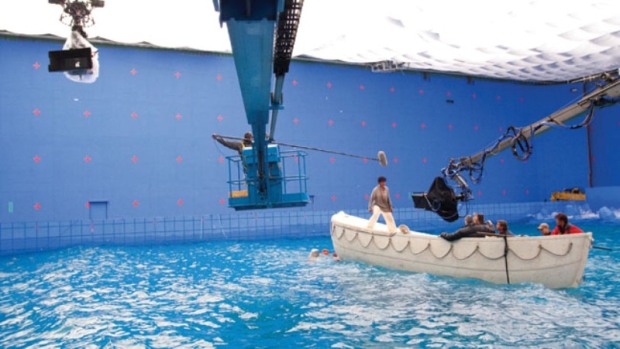 It’s just a movie: the water tank for the sea scenes in Life of Pi. Image from http://movies.infoonlinepages.com/gallery/index.php/Movie-Stills/L/Movie-Stills-Life-of-Pi/Shooting-Stills/Life-of-pi-8

Samuel Taylor Coleridge in 1817 helpfully called this the ‘willing suspension of disbelief’. The themes of his own implausible but compelling sea story, The Rime of the Ancient Mariner, are comparable to Martel’s. The mariner kills his Other, the albatross, but escapes Life-in-Death when he blesses the sea-snakes ‘unaware’; Pi survives because his symbiosis with the tiger (whatever this means to him or us symbolically) keeps him alert and alive.

Coleridge’s idea is valuable because it says writing and publishing go two ways. Viewers/readers make the meaning too. We don’t just consume. What’s the next step? What we see therefore tells us about the truth in here rather than out there. Can we watch a film and also understand we see ourselves?

Fact #6: Implausibility is not the opposite of truth. According to Claude Shannon’s information theory (1948), signal is different from noise because (a) it is unlikely (‘negentropic’) and (b) it changes the state of the recipient. Fiction clearly qualifies under both counts. In fact (?) one of the main problems for writers of stories is fact is stranger than …

The central figure of the floating island of millions of (CGI) meerkats seems to be intended to tax our (and Pi’s hearers) powers of belief. How can such a thing exist? More food than Pi and the tiger can eat, with fresh water that turns acidic at night and eats the eaters? How can there be a human tooth inside a flower? Aren’t these the delusions of the starved and the thirsty?

Previously too the story stretches credulity by inviting us to believe Pi’s family named him after a particularly elegant swimming pool in Paris: Piscine Molitor. Further, to avoid being teased about his name, he both changed it to the ratio of a circle’s circumference to its diameter and learned it to some hundreds of digits – we see him writing them on a blackboard.

To borrow a fine phrase from an unlikely source (former Arsenal Premier League footballer Paul Merson), the film both has and questions ‘unbelievable belief’. On the God question itself, does the film actually ‘make [us] believe’? Firstly, the luscious visuals and boggingly plausible CGI, particularly the mesmeric tiger and the 3D images of luminescent sea creatures at night, are a feast for the eyes – but I can’t believe they’re belief-changing.

Secondly, to expect a rational and coherent answer to this question is to predetermine that the answer is no. Abstract discussion about a cardboard cutout deity is communicatively a broken and sinking vessel, incapable of holding whatever we can imagine to be the attributes of the unimaginable. I am always puzzled why self-defined ‘rational’ atheists assert their position rationally in an aprioristically meaningless universe, as if they and their argument – both extraordinarily like the theistic conception of a Creator – are somehow not part of it.

Thirdly, two key and conflicting moments, one near the beginning: Pi’s usually kindly father (a Richard Dawkins-style devotee of Western and instrumentalist scientific progress) tigerishly tries to devour Pi’s burgeoning inter-species empathy and Pi’s simultaneously Hindu, Christian and Moslem sympathies by making him witness the Richard Parker’s ‘savagery’ as it crushes and eats a goat. ‘The tiger does not feel what you feel,’ Pi’s father shouts. ‘What you see when you look at it is only your emotions reflected back to you.’

The other is near the end. The tiger walks off into the Mexican jungle without looking back; Pi sobs uncontrollably. Pi’s father was right all along, but in the story his reality principle is not enough to prevent his death; Pi is wrong, but it keeps him alive. It is his life. He weeps that his love for the tiger is foolish, but it is movingly and deeply human.

We project our feelings onto any and every story as we eat them up with our eyes. The film becomes the tiger for us, it becomes real for us; we want to live out who we are on and in these shadows on a wall that flicker at us at 24 frames per second. Our seeing is so poor we don’t even notice. Perhaps the God point in the film is this: we want to experience the world this way. Perhaps we will be surprised that the meanings we find are the ones we hoped/feared/wanted to put there – perhaps that is what we mean by ‘God’. But our errors and foolishness are also our successes and dignity, they’re certainly our humanity.

Finally, in this beautifully made and richly generative film, Fact #7: There are no facts. What you make of it is God, your world, your film. You choose.

I’ve been working in book publishing for over 30 years – an industry now in rapid transition. So I’m interested in foundational principles for media, writing and language – what lessons can we learn for how we can and should communicate? How can we make sense of media/technology? Can we transfer some skills from the old to the new? I hope to share (every week-ish) some things I think are wonderful, rich and important. I write longish posts because our complex and fascinating world cannot be reduced to soundbites. Please let me know what you think – contact me at david@propagandum.com
View all posts by Propagandum →
This entry was posted in Film criticism, Media analysis and tagged Ang Lee, CGI, computer animation, Eating, Kabbala, Krishna, Life of Pi, Metaphors, Richard Dawkins, Samuel Taylor Coleridge, The Tyger, Tzimtzum, William Blake, Yann Martel. Bookmark the permalink.