Posted on 17 September 2012 by Propagandum

This is an unusual start to any review, but the gallery’s beautifully panelled and French-polished rosewood doors and postmodern urinal dividers in the spotless toilets were so unusual in their generosity to the possibility of civilized public behaviour that I sincerely believe I enjoyed the exhibition more.

More conventionally, this exhibition has been billed as the largest-ever public display of Leonardo’s anatomical drawings. There are some 87 folios of illustrations from the royal art collection on show in the Queen’s Gallery at Buckingham Palace. Produced between 1485 and Leonardo’s death in 1519, they were acquired by an English monarch (probably bought by Charles II) some time before 1690. Shockingly, they were not published in any form until 1912. The public relations team for Elizabeth II has thoughtfully chosen to counter accusations of at least 222 years of regal dog-in-the-manger insularity by making these drawings publicly available now at this scale, in this the queen’s diamond jubilee year.

Leonardo conceived of the project of publishing a treatise on the anatomy of the human body in about 1485. He spent the remainder of his life – at varying degrees of intensity – preparing material for it. Unsurprisingly, perhaps, the studies and research for it remained unfinished at his death; the book itself was never even started. Judging by these notes he would have beaten – by at least 25 years, in scientific accuracy, in artistic excellence and communicative energy – even Andreas Vesalius’ magnificent and startlingly beautiful/horrific De humani corporis fabrica (1543). Perhaps some of Leonardo’s anatomical insights during the later period of his research – freshly and precisely observed, undistorted by obeisance to classical tradition and the vested interests of professional elites – could, over hundreds of years, have changed medical practice for the better.

Perhaps one of the finest printed books of all time: Andreas Vesalius, De humani corporis fabrica (1543). Illustrations by ‘studio of Titian’. A comparable project to Leonardo’s but completed – what would his book have been like?

What I am specifically looking at in this series of posts are some of Leonardo’s principles of information design, specifically the creativity of his conception of ‘user experience’ – contemporary jargon for what publishers, editors, writers, illustrators and web or graphic designers do. More simply, in terms Leonardo might have used, it is the maker’s consideration, in advance, for how someone else will see/read/experience what he or she has made.

More broadly, I am interested in the nature of representation: what is being represented, how, and why. I am clearly not qualified to talk about anatomy or scientific accuracy, so my comments on medical facts are based on the captions from the exhibition. But we can see that Leonardo has rethought the communication of his research results from first principles. These sketches how Leonardo is thinking, and how he imagined his readers might think.

Along the way, however, I shall at all times try to avoid the word genius – instead of implying that Leonardo is impossibly different from us, it’s much more interesting to analyse what Leonardo sees, how he sees it, and to what purpose. If some of his information design techniques seem modern, and we know they weren’t published until the twentieth century, doesn’t this prove that methods of effective communication arise spontaneously and convergently as insightful responses to problems that repeat themselves throughout history? Is not creativity, then, simply an open, honest and energetic attempt to reflect the truth? This is where we can start to find general principles and apply them to our work. We, like Leonardo, can always try to learn – and we don’t need to be a genius.

It is hard to imagine anyone other than a doctor taking on such an ambitious project – yet Leonardo was the illegitimate son of a peasant and a notary, only ‘informally educated in Latin, geometry and mathematics’ (Wikipedia); in later life he referred to himself as omo senza lettere (‘an unlettered man’). From the age of 14 his training was an apprenticeship to the studio/workshop of the eminent Florentine artist Verrocchio. (Remember painting in the fifteenth century was a trade, albeit highly skilled, with comparatively low income and status.) Perhaps the spur for the mature artist, aged 33, to begin this massive undertaking was to depict the human body more realistically or expressively. Perhaps Leonardo saw an opportunity to make some money from the rapidly growing market growing up around the new cutting-edge information technology taking Europe by storm: printing. A treatise (textbook) on anatomy is a classic publishing ploy aimed at the high added-value STM (scientific, technical and medical) market – think 5 million copies sold of Gray’s Anatomy.

Whatever his motivation, he chose to take on – from scratch – the heroic tasks of study, recording of results and preparation for publication. Making a virtue of his non-medical background, his primary source of information was the human body: he had to find out how to dissect. And, for a non-specialist, cadavers – as Doctor Frankenstein was to find out some three hundred years later – were not easy to get. (The exhibition commentary says there was, contrary to popular belief, no Church ban on human dissection.) At first he seems to have prepared by drawing the internal organs and skeletal structure of horses, cows, pigs or even bears. He also tried to follow the scientifically incorrect schemata of classical authors. The first, blue, room shows drawings from this period.

The introductory text to the blue room containing early sketches. The earliest binding (made after Leonardo’s death, and now empty) is at the front. I don’t mean to carp, but something more typographically delirious than bog standard Trajan and Times Roman would have been good. Late fifteenth-century Italy was not short of wonderful typefaces … 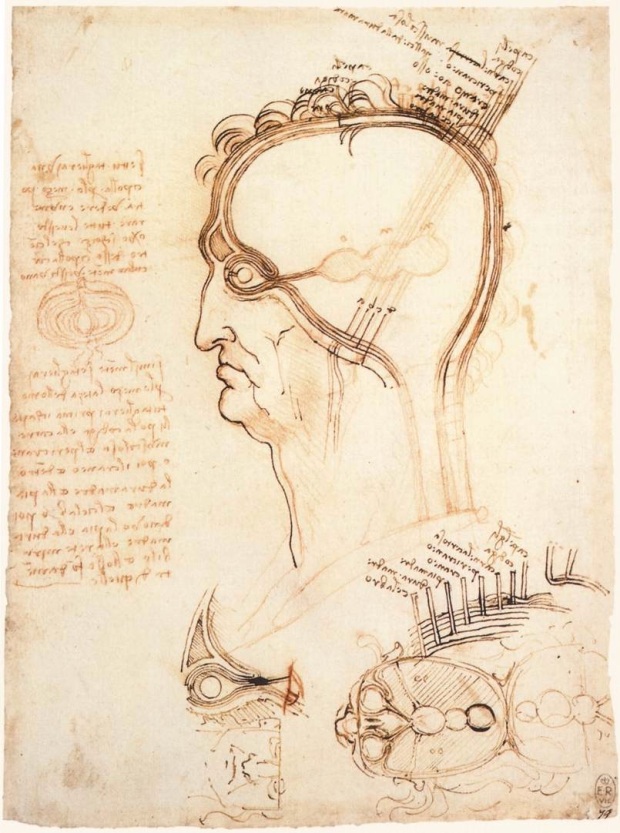 Leonardo’s sketch reflects classical (apparently!) rather than scientific ideas of brain topology. The damson-sized chambers in the middle of the cortex (main picture) represent, from left to right, the senso comune (‘common sense’, supposedly the connecting point for all the body’s sense receptors), imagination/reasoning, and memory. Image: surprisingly (at least for me) the Queen’s Gallery allows photography of the works on display.

This is both scientific research intended for Leonardo only and (to use publishing language) a rough that tries out different ways of presenting information before going to a final published form. In spite of the habitual gallery framing of their exhibits as ‘art’, surely these sketches are more practical – experiments with ways of recording and communicating complex information.

Neither is it what printers and graphic designers 20 years ago used to call ‘camera-ready copy’. Sixteenth-century hot metal typesetting couldn’t manage type on a slant. And the mirror writing is an obvious indication this is not meant to be read by anyone except the artist. As the exhibition captions explain, however, this unusual method wasn’t an attempt to keep his notes secret. They would have been readable, with a mirror, by any literate fifteenth-century Italian. So why mirror writing? Leonardo was left-handed; perhaps his acute sensitivity to the nature of materials and seeing suggested this typically radical and inventive design solution. It allowed him (a) to see what he wrote immediately, not covered up by his writing hand, (b) to label objects very precisely (note the densely packed labels above, all running from right to left) and (c), ever trying to be practical, to avoid smudging the ink. Or perhaps it was another example of the amazing brain-wiring that the largely autodidact Leonardo never had corrected by censorious teachers.

In terms of information design (the designer’s practice/choices that are intended to help others readily understand their work in a particular way), note the lateral small cross-section at the bottom, with, lower down to the left, a cutoff front view of a face (a familiar reference point) so we see the height of the section in relation to the skull. On the right we see Leonardo has outlined the top half of the skull hingeing away to the right; this is sketchy, but even his barely considered sketches show the palpability of embodied experience. Note the emotional content of the main drawing, the vertical section: a fully scientific (by contemporary standards) section would have sliced off more of the face and neck – Leonardo seems to want to show a recognizably human profile. (Compare this with the plastic anatomical model below.) And the baroque swirls of hair in every sketch are a feature of Leonardo’s astonishing perception of pan-creational life-force.

Back in the world of information design, note the extreme minimalism of the labeling conventions, where the plainest of keylines unambiguously connect referent to referred solely by differences in length. The written captions radiate out in expressive imitation of (and at a larger scale from) the drawn layers. An insert on the right, towards the bottom, mostly in blacker ink (done some while later?) shows Leonardo’s further thoughts. In the onion sketch on the left Leonardo notes correspondences between an onion and the skull. This isn’t conventionally good science because vegetables grow differently from people’s heads, but Leonardo vivacious conception of the unity of the created world – always embodied, always connected, always real and fully alive, never abstract or solely intellectual – gives us something different and (dare I say?) more interesting.

I am not excusing bad science, but I am suggesting that curiosity and openness to phenomena precede observation and scientific work generally. As Leonardo’s anatomical work attests, his predisposition to observe interconnectedness opens up his faculties of perception to new insights. This is not superhuman; this is the way all of us understand metaphor. If this is not duly (or dully) scientific, might there be something wrong with our conception of science?

Let’s look at one of the contemporary plastic models of the human body also on display. These anatomical models (‘SOMSO’) are by Adam,Rouilly (their spacing). This is an enriching idea by the exhibition organizers: we can compare the anatomical veracity of Leonardo’s observations with modern science. The plastic models are impressive and no doubt educationally useful, but the comparison with Leonardo’s work shows they are oddly non-human and simplistic; the sanitized and ‘educational’ use of highly differentiated/flattened colour and plastic has more than a nuance of the products of Fisher-Price. 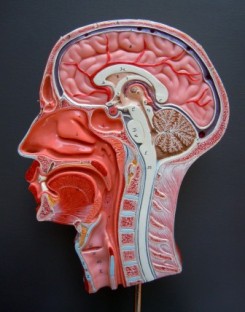 An Adam,Rouilly section of the cranium

To be fair to these models, competition with perhaps the finest artist/draughtsman in Western civilization was always going to be a struggle. But can it be, over the course of 500 years of improvements in medical knowledge, that something has been lost?

I don’t have any more space in this post to explore more of Leonardo’s insights in detail, but I hope to continue these themes shortly.

I’ve been working in book publishing for over 30 years – an industry now in rapid transition. So I’m interested in foundational principles for media, writing and language – what lessons can we learn for how we can and should communicate? How can we make sense of media/technology? Can we transfer some skills from the old to the new? I hope to share (every week-ish) some things I think are wonderful, rich and important. I write longish posts because our complex and fascinating world cannot be reduced to soundbites. Please let me know what you think – contact me at david@propagandum.com
View all posts by Propagandum →
This entry was posted in Art criticism, Media analysis, Medicine, Publishing and tagged Art, Communication, Creativity, Diamond Jubilee, Information design, Leonardo da Vinci, Philosophy of science, Theory of medicine, Vesalius. Bookmark the permalink.