The pleasures of fine lettercutting in stone

Posted on 11 September 2012 by Propagandum

Here’s a lovely thing I was very lucky to be given a few weeks ago. I hope anyone with an interest in words, writing and lettering will enjoy it here too.

What is it? It’s a Clipsham limestone square pillar with handcut lettering on each of the four sides. It’s very heavy, about 35 kg (80 lb), and about 50 cm (20 in.) tall. The strong textures look very handsome outdoors, where the sunlight strikes the lettering from different angles at different times of the day or season, and makes ever-changing abstract highlights and shadows. 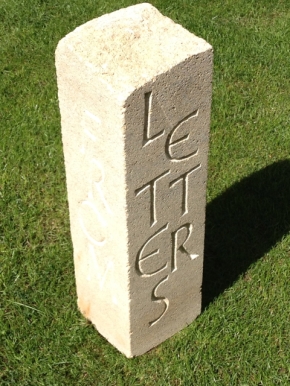 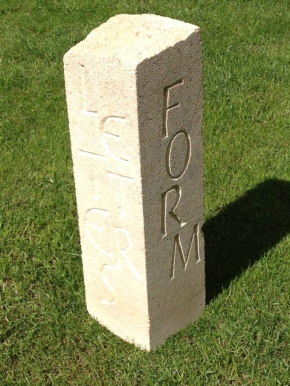 The four sides read LETTERS FORM WORDS FROM. Note the pillar/obelisk only fully communicates with us in its original form, not in explanations, translations or reproductions. We need to walk round it clockwise to read ‘Letters form words, words from letters.’

Time, rain and dirt are going to change it, so the overhangs of the incised lettering will go dark while the three flat sides get whiter and streaked with rain. Raindrops bouncing off the ground will make the base darker than the top. On the fourth side, the lettering for WORDS stands out in relief, and the recessed background is deliberately left rough to attract – after many years – velvety black grime.

For now, tiny flecks of quartz that computer screens just aren’t bright enough to show sparkle in the sunlight. The fossil-bearing Clipsham has fragments of seashell in it, revealing its origins beneath the seas millions of years ago. Otherwise it is oolitic (one of my favourite words), meaning it looks as if it is made up of tiny eggs, each about the same size as sturgeon roe (caviar). It is a freestone, meaning it can be cut or carved in any direction. The freedom from constraints needs those with the highest-developed thoughts and most esoteric masonry skills, hence freemason.

The form–from pun makes me smile. Having worked in book publishing – including editing, design and typesetting – for 30 years it makes me think about authors who didn’t spot they typed one when they meant the other. Spellcheckers don’t see anything wrong either. It’s a classic typo. Perhaps there’s a point here about human and machine errors. I like to think the human ones – and they’re the ones behind the machines too – have some dignity. As Samuel Beckett’s Worstword Ho (1989) suggests, ‘Try again. Fail again. Fail better.’

What if we go anticlockwise? ‘Letters from words … words form letters.’ Weird backwards thinking is sometimes creative and helps us think unusual thoughts, as on the other side of Alice’s looking glass. The more direct and emotive letter association here, though, is with the thing handwritten with pen on paper, friendly and personal, sent to or from someone special to us. I’m sure people these days send love-emails or emails of condolence, but a deeply felt letter kept from years ago is a thing of wonder, isn’t it?

The lettering on three sides cuts into the hard stone; it is impressed. The WORDS letterforms stand proud; they are expressed. The stonecutting here, like engraving or woodcuts from the world of printmaking, is a medium that asks palpably direct questions about impressions and expressions.

The incised Humanist italic FROM and FORM, with their elegant serifs, derive from the Roman stonecut lettering tradition. The LETTERS side, with its rounded Es, hints both at uncials favoured by eighth-century Irish scribes and Greek epsilons. The variety of letterforms has an élan and a joie de vivre that recall the mastery of David Jones:

David Jones (1895–1974) Exiit Edictum (1949). This superb hand-drawn lettering is both formal and lithe. The epigraphy responds to the unusual paper medium with a mixture of playfulness and solemnity. It celebrates the Nativity story from the Gospel of Luke: 2:1 Exiit edictum …, ‘There went out a decree from Caesar Augustus …’, 2:7 Et peperit … in praesepio, ‘And she brought forth her firstborn son … and laid him in a manger’ and 2:12, et hoc vobis signum, ‘and this shall be a sign unto you’. Jones frames these texts on the top and left with the striking pre-Christian prophecy from Virgil’s Eclogue IV ll. 6–10: iam redit et Virgo, … iam regnat Apollo, ‘Now the Virgin returns … now your Apollo reigns.’ Drawing and gouache on paper, 406 x 330 mm. © Estate of David Jones. Image from http://www.tate.org.uk/art/artworks/jones-exiit-edictum-t03192

One of the subtlest pleasures of craftsmanship – such as a beautifully made table, typeface, typeset page or stonecut lettering – is the graciousness of the maker’s self-effacement. He or she doesn’t tell us what to think or how to feel; the intentionality drops away, leaving only a thing-for-us. When I rang the maker of this piece, Cambridge-based stonecarver Keith Bailey, he simply said the words came to him ‘by accident’. A books-about-books group book choice earlier this year was The Craftsman, by Richard Sennett, itself a beautifully crafted if necessarily literary exploration of the phenomenology of manual – non-verbal – skill; in this spirit, notice the lightness of Keith Bailey’s claim, as if he might never (!) have thought about this particular distillation of words during more than 50 years of painstaking work on letters in stone.

His work here gives me the gift of writing about it in a way that probably says more about me than it, but I hope I have done it the justice of at least trying to pay careful attention. Whatever my imaginings, the mass of the obelisk itself will be around for a good few hundred years longer than I will, continuing to give others pleasure and provoke interesting thoughts.

The giving of good gifts is in itself both an art and craft – I’m now thinking of the generosity of my friend who gave it to me. Every day I can see the solidity of his rare and inspirational ability to imagine, enter into, understand and enjoy what someone else thinks and feels.

I’ve been working in book publishing for over 30 years – an industry now in rapid transition. So I’m interested in foundational principles for media, writing and language – what lessons can we learn for how we can and should communicate? How can we make sense of media/technology? Can we transfer some skills from the old to the new? I hope to share (every week-ish) some things I think are wonderful, rich and important. I write longish posts because our complex and fascinating world cannot be reduced to soundbites. Please let me know what you think – contact me at david@propagandum.com
View all posts by Propagandum →
This entry was posted in Art criticism, Media analysis, Typography, Words and tagged Clipsham, Craftsman, David Jones, Letterform, Lettering, Richard Sennett, Samuel Beckett, Stonecutting, Typography, Words. Bookmark the permalink.

2 Responses to The pleasures of fine lettercutting in stone