Bicycles, beds, chairs, doors – the use of modern art

‘Mr. Beckett’s patient concern with bicycles, amputees, battered hats, and the letter M’ starts Hugh Kenner’s still impressive Samuel Beckett: A Critical Study (New York: Grove Press, 1961, p. 1). My previous post tried to talk about the same things, respectively a human-centred ethos for designing our technologies, the power of the imprint of the object world on our bodies/minds, and the humanity/dignity of being wrong. Notice that Kenner helps us see in Beckett that the alphabet and writing press in on us too. ‘Patient concern’? Supposedly fierce and uncompromising modern art runs the full range of human emotions …

First off, let’s see where we get to on Marcel Duchamp’s improbable marriage of bike and chair. Perhaps Duchamp’s ‘readymades’ are, on one level, snook-cocking swipes at William Morris’s ‘have nothing in your home but what you know to be useful or believe to be beautiful’. In spite of Duchamp’s cool sarcasm I believe he also tries, quite straightforwardly and the same as any kind of traditional art, to help us see the world vividly and freshly, and to tell us something true. 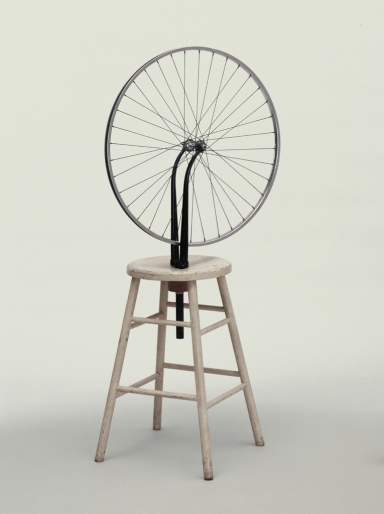 Marcel Duchamp (1888–1968), Bicycle Wheel (‘assisted readymade’), 1913, remade 1951. When Duchamp needed some income in the 1950s he had copies made as ‘an edition’. These were then sold by an upmarket art dealer for large sums. I don’t think this diminishes his oeuvre at all; getting two jokes out of the art market and some cash as well seems fair enough. Image from Wikipedia

At the very least, Duchamp’s impossible conjunction of non-sitting and non-moving forcefully implies something that isn’t there: the human body. Or does this piece say machines have pushed us off our perch? Chairs have legs, but have our thoughts become mechanical? (From popular culture I’m thinking of The Eagles’ ‘Don’t let the sound of your own wheels drive you crazy.’) I’m also thinking that in William Blake, the ‘dark Satanic mills’ are not just the machines of the Industrial Revolution but also the dead, mechanistic cosmological system of Newton and – more personally and psychologically – thoughts that go round and round and round …

Or is it another Duchampian play, from his extensive iconography of these things, on mechanical male and organic female? Whether in Duchamp or modern art generally, I don’t see openness to multiple interpretations as just an amusing game or something ‘intellectual’: we can try or start to understand ourselves by what we think we see. Whether the artist intended a ‘meaning’ or not probably doesn’t matter, though I like to think we can find in Duchamp’s work, like Beckett, a ‘patient concern’ that helps us to find something that makes sense for each of us. 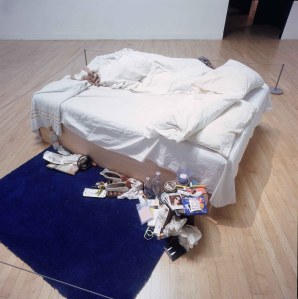 Beds: Tracey Emin’s My Bed feels both highly personal, attention-seeking and (for me) uncomfortable, sickening or embarrassing. These strong adjectives do not mean, by the way, that I am criticizing it. That’s simply how I feel when I look at it … The piece clearly works on all us at the provocative borderline of emotionality and exploitation, truth and lies. In another register of human experience away from art, going through the things that used to belong to someone who has died can feel very poignant, but perhaps because it is the opposite of Emin’s kind of exhibitionism: their possessions are private, never meant to be on display. I mention these experiences because Emin’s piece doesn’t get there – for me. How could it? Nevertheless, some people say they feel powerfully moved by it.

There again, why does art have to be simplistically truthful or emotional? In literature, fiction rather than autobiography is usually the premier genre for emotional intensity; the point is not to guess what is true in the work of art but to respond fully and truly, and to know our response. We don’t need to like the art itself – as if liking was either necessary or sufficient for responding fully, for starting to understand richly …

Furthermore, if an artist says they are telling the truth it doesn’t mean they are. They could be experimenting or even lying– when has ‘the truth’ been easy to define? Emin’s populist emotionalism may in fact ride (or sit) on top of specialized art-philosophical analysis. Here is an extract from Book X of Plato’s Republic:

Socrates: And the painter too is, as I conceive, just such another [similar to a poet] – a creator of appearances, is he not?
Glaucon: Of course.
Socrates: But then I suppose you will say that what he creates is untrue. And yet there is a sense in which the painter also creates a bed?
Glaucon: Yes, but not a real bed.
Socrates: And what of the maker of the bed? Were you not saying that he too makes, not the idea which, according to our view, is the essence of the bed, but only a particular bed?
Glaucon: Yes, I did.
Socrates: Then if he does not make that which exists he cannot make true existence, but only some semblance of existence; and if any one were to say that the work of the maker of the bed, or of any other workman, has real existence, he could hardly be supposed to be speaking the truth.
Glaucon: At any rate, he replied, philosophers would say that he was not speaking the truth.
Socrates: No wonder, then, that his work too is an indistinct expression of truth.

I like to think of Emin’s piece, therefore, as a serious and challenging testbed (why not?) for exploring emotional representationality; she questions, via her hypo- and hyper-authenticities, mechanistic thinking and ingenuous or reductive interpretation.

Here is another chair piece about seeing and thinking-about-seeing: Joseph Kosuth’s One and Three Chairs. 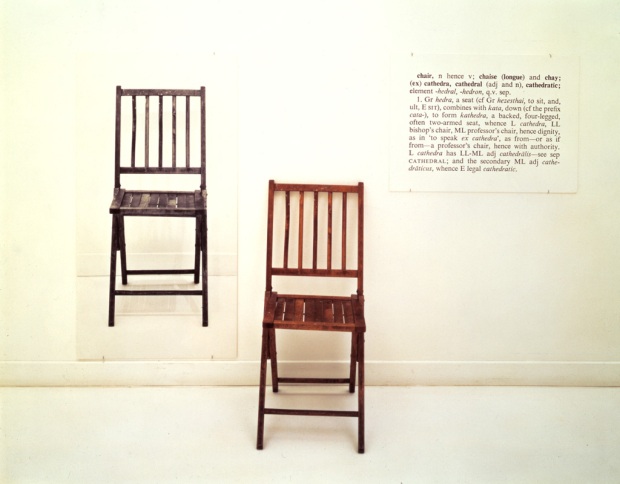 Trying to be more precise about media, this is an image on your computer screen of a picture file on a blog website (via the internet) of a photo of an installation of a work of art that consists of a chair, an enlarged photographic reproduction of the chair and a photograph of the typeset definition (in English, appearing as if copied from a dictionary) of ‘chair’. (The definition looks odd to me – it’s all etymology and no explanation of what a chair is. And what is a chay?) The work of art in fact consists of the specification or design of all these stages. There is no ‘original’: there can be any number of different chairs, photographs and definitions; each is ‘the’ work of art. This work, like Duchamp’s Bicycle Wheel readymade, can be produced indefinitely; its reproduction changes the experience completely.

Note that Kosuth’s piece (in all of its variants) does have ‘real’ chairs – the ‘one’ in the title. Perhaps on this site it should just be called Three Chairs. Of course the reproduction of any work is radically different from its original even if there is one. If you played Schubert’s String Quintet in C major D956 (for example) on the tinny speaker of a phone it would probably sound terrible, but I have heard people disparaging the paintings of Mark Rothko even though they may have only seen a postcard-sized reproduction in the four modest yellow/magenta/cyan/black printing colours in a book. His enormous paintings in the Tate Modern in London, for example, are both intensely and subtly colourful in a way that is effectively unreproduceable. Compared with the book or web image, the emotional experience is very different.

It is always a problem with interpreting modern art that we are usually oblivious to the obvious, at least in terms of media. We can see this, for example, in a TV reality show of extreme feats of endurance in a desert; we may feel anxious about the protagonist’s survival even though a full film crew – and catering – is presumably on hand. Marshall McLuhan called this ‘narcissus as narcosis’, or the human tendency to regard our perceptions as natural and normal – even if they are not.

So – for me at least – one of the pleasures of modern art, as William Blake (The Marriage of Heaven and Hell, Plate 14) suggests about ‘printing by the infernal method’, is that it helps us cleanse ‘the doors of perception’ so that ‘every thing would appear to man as it is, Infinite’. Remember too that interpretations, like the two-faced Roman god Janus (cf. January), go in two directions: they reveal the perceiver as well as what we perceive. Duchamp, during his supposedly solely chess-playing years, found a compelling way to express this. He instructed a carpenter to install a single door for two rooms so that when one doorway is shut, the other must be open. Was this just home improvement? Or does it, in inverse proportion to its overt modesty, model the brave anti-reductionist project of modern art? As a commentary on itself, might it not be both open and closed to interpretation?

Modern art is both from and about our world; much of what we think of as reality is the aggregate of so many different kinds of media – including these words and images you see now. So the doors of perception are nowadays not just of the body but also of technology. Looking backwards from our own age, might not Duchamp’s door therefore also be a highly expressive metaphor for the Boolean logic of binary digital processing? Open or shut? On or off? True or false?

I suggest that art, as Marshall McLuhan once said (Gutenberg Galaxy, University of Toronto Press, 1962, p. 246) about education, is ‘civil defence against media fallout’. It is, in a media world of radioactive meanings, a Geiger counter to help us live more purely, more fully.

On the subject of chairs and media, may I bring to your attention to the thaumaturgic and mighty (if also mightily expensive) Bibliochaise? 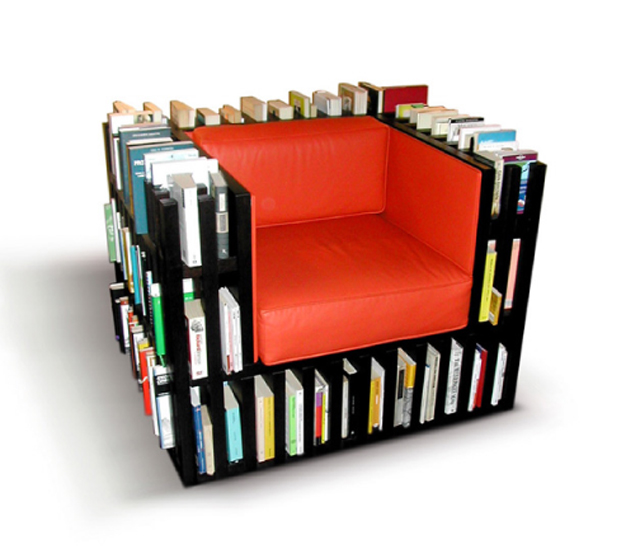 I’ve been working in book publishing for over 30 years – an industry now in rapid transition. So I’m interested in foundational principles for media, writing and language – what lessons can we learn for how we can and should communicate? How can we make sense of media/technology? Can we transfer some skills from the old to the new? I hope to share (every week-ish) some things I think are wonderful, rich and important. I write longish posts because our complex and fascinating world cannot be reduced to soundbites. Please let me know what you think – contact me at david@propagandum.com
View all posts by Propagandum →
This entry was posted in Art criticism, Media analysis and tagged Bibliochaise, Bicycles, Chair, Conceptual art, Duchamp, Hugh Kenner, Joseph Kosuth, Media studies, Modern art, Readymades, Samuel Beckett, Tracey Emin. Bookmark the permalink.

6 Responses to Bicycles, beds, chairs, doors – the use of modern art