Posted on 1 March 2012 by Propagandum

27 February was the first meeting of our Cambridge books-about-books book group. It has been a pet project I have been looking to get off the ground for a couple of years. It is in the semi-public domain under the aegis of CAMPUS, Cambridge Publishing Society.

Its origins spin out from several sources. Source 1 was the website of my book production company The Running Head, a site that became (with an energy that took even me by surprise) deeply concerned with the bookness of ‘the book’. The idea is that the customary commercial writing promoting my company has a counterpoint of texts and pictures about reading and books. The pics and quotes are randomly recombined every time you visit or refresh, so you get some pleasurable and unpredictable transdisciplinary, cross-cultural and inter-epochal connections. I also like to think I have a good eye for pictures that make a strong editorial point; I have been collecting suitable subjects for some years. The texts come from reading, search, serendipity and books we have worked on. I tried to make them honest: I love (a lot of) books but I can’t abide the dreary and enervating ‘books are good’ argument that surely ends up giving them the kiss of death; books are also bad, dangerous, wrong, funny, boring, bad-tempered, rude, riotous, alive … The first collection of these kinds of quotes about them was for our startup promotional booklet in 1996, where it seemed appropriate that if the company had not yet produced a book for a publisher then at least our main sales brochure would show that we could do it, hence a (small) book about books.

The great book group in the sky. The four evangelists are presumably reading their own gospel, but what about Jesus? From St Andrew’s, Chesterton, Cambridgeshire. My photo, from http://www.therunninghead.com

This has seemed ever since – to me at least – richly generative of links and connections, latterly intensified by the obvious paradox that it is the company’s website that is about books and reading. The theme is stated clearly in a selection of some of the texts:

Any text is constructed as a mosaic of quotations; any text is the absorption and transformation of another. The notion of intertextuality replaces that of intersubjectivity.
Julia Kristeva, ‘Word, dialogue and novel’ in The Kristeva Reader, ed. Toril Moi (Oxford: Blackwell, 1986), p. 37

Tell me, ye learned reader, shall we for ever … make new books, as apothecaries make mixtures, by pouring only out of one vessel into another?
Laurence Sterne, The Life and Opinions of Tristram Shandy, Gentleman (Oxford University Press, 1983), p. 275. Sterne is paraphrasing – ironically – Francis Bacon.

I hope you can see that the links branch out and interconnect with yet more links, rather like an icily sublime Borgesian infinite library or its faster contemporary version, the white hot heat of the internet …

‘Keep calm and carry on’ indeed: an interior view of the bombed library at Holland House, Kensington, London, with readers apparently choosing books regardless. Photographed in 1940. From http://www.therunninghead.com. By permission of English Heritage. 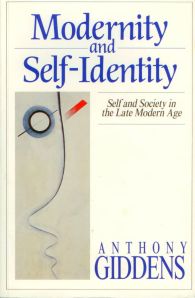 4 out of 10. Awkward empty space and meaningless squashed typography. Odd biomorph image – does ‘self-identity’ really look like this? The publisher is not doing much justice to the author’s carefully considered writing …

Source 2 was a reading of Anthony Giddens’s Modernity and Self-Identity (Cambridge: Polity Press, 1991), which explicitly claims that self-reflexivity is a characteristic of ‘late modernity’, i.e. the age in which we live. I took ‘self-reflexivity’ to mean consciousness that is conscious of itself, and (if possible) without solipsism. Digressing sideways to reflections of this in media, books about books – or even, like Sterne’s Tristram Shandy, about themselves – are still intended to be read by many others. The financial thresholds over which publishers must step have nearly always guaranteed and quality-assured this position, this kind of communicative premise, which the internet manifestly does not. My mini-anthology of writings across millennia, however, suggested (to me at any rate) that Giddens’s point was not entirely accurate, but this did not matter because it seemed more exciting that we could track back the continuities of modernity to early modern and even ancient times.

Source 3 was psychoanalysis. This may now seem odd to anyone under 50, but during the 1960s and 1970s it seemed obligatory, even fashionable or sexy, to read heavy-duty Marxist and psychoanalytical theory. Reading Capital, at least in my social milieux, was a rite of passage and an admired signifier of adult seriousness. Freudian theory generally was a further radical offshoot from this time, when ‘the personal is political’ was a slogan that seemed new, exciting and important. It must be said that some of the theoretical lacunae of Marxism (for example no conception of or interest in childhood or interpersonal relationships) were not very helpful to the conduct of the revolutionary cadre’s personal lives, for which generally a suitable term might be disastrous. Psychoanalysis seemed a useful, even Romantic (capital R) thing to do, with the advantage that Dylan (never Bob if you wanted to be cool) now made a lot more sense when he sang ‘There’s no success like failure / And failure’s no success at all’ or even ‘You’re invisible now, you’ve got no secrets to conceeeaaaaaaal …’

The psychoanalytical ‘Where that was, there shall I be’ is another reworking of consciousness becoming conscious of itself, this time linking and restoring connections both within the psyche and to/from the world. Moving sideways again to media, might not a book, ‘the precious life-blood of a master spirit’ (John Milton, Areopagitica), be a kind of reflection of consciousness, and books about books therefore model the transformative and potentially therapeutic awareness of awareness?

Source 4: Stafford Beer’s astonishing Viable Systems Model was something I came across when I was doing a management course by self-managed learning. (The foundational idea was that if one is a manager, why cannot one manage, self-reflexively, one’s own learning and assessment?) Beer’s VSM specifies that one of the functions of System 4 (the managed creation of the future) is for the system to have a model of itself-in-the-world. There is not enough time to go into any detail of the richness and extraordinarily wide-ranging implications of Beer’s model here, but in my view the study of cybernetics is a very important and necessary conjunction of technical expertise with a genuinely emancipatory social project. In a highly and increasingly technicized world, the purpose of technology must be, as the title of Norbert Weiner’s cybernetics book (Boston, MA: The Riverside Press, 1950) puts it, The Human Use of Human Beings. A possible reason for the relative obscurity of cybernetics is its difficulty, including (at theoretical level) complex mathematics. Some might say that if cyberneticians were so good at understanding the quanta of information flow they ought to have published simplified educational material with a broader appeal – this might still happen. Massive complexity, though, can never decently be made entirely simple (the clunky title of Dawkins’s The Magic of Reality proves my point), so the cybernetic project may have partially succeeded in making it simply difficult.

Beer’s System 4, with a model of itself … From Diagnosing the System for Organisations (Chichester: John Wiley, 1985, p. 116). In Beer’s own handwriting.

As a result of the current rapid rate of technical change, the publishing industry looks to be in headless chicken mode – Systems 1 and 2 in Beer’s taxonomy are pure operation (running around the farmyard), with no strategy. Systems 3, 4 and 5 are in the chicken’s head. (Indeed, Beer’s magnum opus is The Brain of the Firm; it is a brilliant recasting – in terms of the universally generalizable viable systems model – of what was previously only a metaphor of commercial and social organizations as the human body.) A chicken with no head is not a viable system. At times such as these the publishing industry is in dire need of adequately expressive models of itself; at a personal level, no matter what kind of work people do in this or any other industry, reading some good books has got to be a help.

What book did we read? Friedrich A. Kittler, Gramophone, Film, Typewriter (Stanford University Press, 1986). ‘Where are the books this is about?’ I hear you perceptively ask. I confess I haven’t really answered the question but I have indeed written a review.

I’ve been working in book publishing for over 30 years – an industry now in rapid transition. So I’m interested in foundational principles for media, writing and language – what lessons can we learn for how we can and should communicate? How can we make sense of media/technology? Can we transfer some skills from the old to the new? I hope to share (every week-ish) some things I think are wonderful, rich and important. I write longish posts because our complex and fascinating world cannot be reduced to soundbites. Please let me know what you think – contact me at david@propagandum.com
View all posts by Propagandum →
This entry was posted in Business, Publishing and tagged Book groups, Books, Books about books, Communication, Cybernetics, Giddens, Psychoanalysis, Stafford Beer, The Running Head, Viable Systems Model, Weiner. Bookmark the permalink.