Ordinary is beautiful, beautiful is ordinary

Posted on 20 February 2012 by Propagandum

I hope this selection doesn’t seem too random; we all collect texts, images and things people say, don’t we? The justification, if I need one, is that I am trying to reflect, in this tiny collection, something of the ordinariness and beauty of being human. I wish for my children that they may find, at times, a sense of glory and pleasure in simply being who they are. I hope they can love themselves and others for the endless difference of their ordinarinesses. That would be beautiful.

In this blog I often try to expand how we understand media; in the previous post I suggested that writing and ordinary books/Kindles are a weird but strong match of medium to the people who look at them. This is rather an oblique connection, a kind of empathy between us and a medium – do people ever love their televisions the same way? I remember reading Winston Churchill’s account of a meeting with newspaper magnate Lord Beaverbrook where the latter pulled a book off his shelves, found the binding was tight and so broke the back of the book with a violent crack. Churchill wrote – giving us the pleasure of an insight that is new and deeply true – that Beaverbrook was clearly a man he could not trust.

I believe we connect our bodies and minds with some of the characteristics of books and writing. This is usually subconscious, easy or just taken for granted; the ‘fit’ of a book to our physiology, sensorium and willing/active powers of cognition seems solid somehow, or an achievement, like a favourite sweater or the pruned-down conversations between people who have been married a long time. In this blog I often try to argue that this kind of comfort feeling is not just the deadening, anaesthetic force of habit or fear of media change. For me the Kindle is currently too exciting and new to feel properly ‘ordinary’, but the words on it (and in this blog) are a medium too well known to be fully visible at all.

So the medium of writing is similar to what it’s like to be us, to be both ordinary and extraordinary. I hope most of you would agree, at least in outline. But perhaps this observation feels empty – it states the obvious, like ‘water is wet’. Perhaps it sounds trite – it tries to force us to feel something these particular words just don’t or can’t.

But we communicate only when we make a connection – this doesn’t just go one way. Two people (at least) are required. There is no such thing as a private language. If there are aliens they don’t seem to have worked out that contact requires the person contacted to know it – unless they have the ironic solicitude of David Bowie’s ‘Starman’, who would ‘like to come and meet us / But he thinks he’d blow our minds’. (And Bowie has sold millions of copies back to us of his carefully distanced representations of our existentially fragmented, desperate and child-like longing for contact.) In another emotional and sexual frame of reference Janis Joplin sings a kind of feeling so intense we can only understand it as a modal shift to a world we see: the blues. Her version of ‘(Take another little) Piece of my heart’ expressively summarizes the ‘communication as connection’ theme of this paragraph. After all Joplin’s trademark melismas there is a tense hammerblow eight-crotchet repetition on the third of the sub-dominant that resolves lightly down to the third of the tonic: ‘You know you got it when it makes you feel good.’

In the very different world of work, words and type here is something beautiful and moving: ‘This is a printing office’ by Beatrice Warde (1932). It belongs to a category of particularly happy objects I’ve tried to explore elsewhere as examples of themselves, things that knowingly do what they are. I’ve seen this poster smudged with inky fingermarks on the walls of printers’ workshops – and these places used to be pretty grimy. The physicality of the object (including smell and dirt) and the way of making it are immediately graspable and readable – in literal and metaphorical senses – the same way a child will be thrilled by a digger or a steam train. Its original and entirely modest function was specimen copy to show off Eric Gill’s Perpetua Titling for her employer, the Monotype Corporation. This is a good reproduction here, but the disembodied cleanness – I presume you are not standing in a printing office – can’t give you the proper fullness of meaning:

Here’s another printed poster (below), a quotation from Daniel Berkeley Updike, the US writer about type and founder/Managing Director of the Merrymount Press. I got it free at a printing fair in Birmingham many years ago. It is handset with generous margins and printed letterpress onto a handmade rag paper – I hope you can see the roughness of the (untrimmed) deckle edge. The large Walbaum typeface is open, warm and dignified. This production is rich in spirit but not lavish; it is worth hardly anything. I have it framed on the wall in my office and get a sense of satisfaction, pride in a job well done, every time I look at it. What do you think?

In the world of the fine arts Rembrandt’s self-portraits have the same kind of dignity of the journeyman about them. (I am borrowing some of John Berger’s analysis in Ways of Seeing.) Current auction values and art-history reputations partially obscure the meaning of these paintings; whatever self-analysis we may now attribute to them I presume Rembrandt painted self-portraits not least because no one at the time was giving him any paid work. Perhaps these pictures are for no one; they have a self-absorption and intimacy we, by an accident of history, may now look at even if we weren’t intended to. In some 40 examples of the genre we can see a movement from youthful insouciance to the complex dignities of the indignities of age and blur: 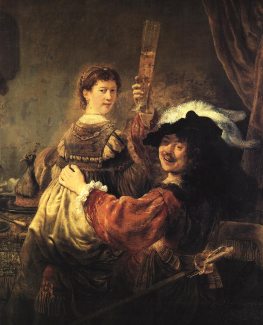 Self-portrait with Saskia (his wife), The Prodigal Son in the Tavern, 1635. Gemäldegalerie Alte Meister, Dresden. Image from Wikimedia Commons

Self-portrait, painted between 1665 and 1669 (the last four years of his life). In Kenwood House, Hampstead, London. Image from Wikimedia Commons

The music of J. S. Bach has it, at least for me. Even his simplest pieces for the keyboard have a satisfying workmanlike self-reliant solidity that depends on each of the parts metaphorically listening to the other, like the experience of working together with a group of considerate people. These pieces don’t seem to need an audience. By contrast, for me Mozart’s keyboard music has a very different connection with the listener, who seems to be someone different from the player. His pieces become most difficult when most open and transparent – admittedly my technique is not good, but I feel mocked by Mozart’s brilliance and gently encouraged by Bach. The latter’s virtuosity is hardly less than the former’s, but Bach’s dedication to the quotidian in the cantatas, the masterliness of his workaday organ pieces for daily church services and the keyboard pieces (for example the 48 Preludes and Fugues, the Art of Fugue) designed to teach more than we pupils might ever imagine are for me deeply moving and ways I think I can begin to understand ‘the spiritual’.

In literature the the dignity of human life and work is there in George Eliot’s Middlemarch, so-called ‘A Study of Provincial Life’. On the last page of one of the longest, most ambitious and intelligent novels in the English language we get this extraordinary tribute to the ordinariness of the heroine Dorothea:

Her full nature […] spent itself in channels which had no great name on the Earth. But the effect of her being on those around her was incalculably diffusive: for the growing good of the world is partly dependent on unhistoric acts; and that things are not so ill with you and me as they might have been, is half owing to the number who lived faithfully a hidden life, and rest in unvisited tombs.

Here is the least George Eliot-like passage I know (again from Middlemarch, Harmondsworth: Penguin, 1965, p. 226). I respect and admire Patrick Ness for choosing it as the epigraph to his children’s novel, The Knife of Never Letting Go:

If we had a keen vision and feeling of all ordinary human life, it would be like hearing the grass grow and the squirrel’s heart beat, and we should die of that roar which lies on the other side of silence.

What does this feeling sound like in negative imprint? An otherwise nameless gruff captain carries out Edmund’s order in King Lear (Act V, scene iii) as he says: ‘I cannot draw a cart, nor eat dried oats; | If it be man’s work, I’ll do ’t.’ Shakespeare gives this bit-part 18 words and 17 syllables to summarize the play’s mad/absurd/ironic/bestial nihilisms, lower than which the author and even twentieth-century history cannot take us. The captain then goes off, we find out later, to hang Cordelia.

It is there, beautifully and boldly, in Ulysses by James Joyce. The perhaps ironic premise of a contrast between the Homeric past and the banality of an imagined 16 June 1904 in Dublin (also the non-fictional day of Joyce’s first date with his future wife, Nora Barnacle) melts away under the power of the creative energy of Joyce’s language. The final sentence of the book, some 4384 words since the previous full stop, could not be any more affirmational of the simple, the ordinary: ‘yes I said yes I will Yes.’

In practice the list is endless, because we can always find the ordinary everywhere, and in a particular state of mind – as the quotation from D. B. Updike suggests – we can sometimes find something beautiful about it. Do let me know if there’s anything like this you’re thinking of.

I’ve been working in book publishing for over 30 years – an industry now in rapid transition. So I’m interested in foundational principles for media, writing and language – what lessons can we learn for how we can and should communicate? How can we make sense of media/technology? Can we transfer some skills from the old to the new? I hope to share (every week-ish) some things I think are wonderful, rich and important. I write longish posts because our complex and fascinating world cannot be reduced to soundbites. Please let me know what you think – contact me at david@propagandum.com
View all posts by Propagandum →
This entry was posted in Art criticism, Business, Media analysis, Writing and tagged Books, Communication, Daniel Berkeley Updike, George Eliot, J. S. Bach, James Joyce, Kindle, Modalities, Rembrandt, Shakespeare. Bookmark the permalink.