The 12 books of Christmas

Posted on 13 January 2012 by Propagandum

After the Cambridge festival of nine digital devices and arguments, and after some splendid bouts of Balderdash with various combinations of my extended family, the reality principle casts its sober light once more on Propagandum Towers. This follows, of course, the excellent but not currently much honoured Feast of Fools on 5 January, also known as Twelfth Night, the one day of the year where the world might relish turning itself upside down, the day the kings serve the servants. There is more than an echo of this very ancient festival in the homage to a particular carpenter’s son by three kings in a stable, as handsomely illustrated by Rubens in my previous post. I usually lose the meaning in the superstitious panic to get the decorations down in time, and think of Twelfth Night’s appeal to Shakespeare’s increasingly (from about 1600 onwards) astonishing explorations of disorder, illusion and madness – in this play, in comic form.

My Christmas media harvest this year included both a Kindle, in a svelte suede wrapperette, and (conveniently continuing the post-Christmas ‘12’ theme) the following diamond dozen. I have now read a few of them, bits of some and none of most, but one of the pleasures of reading is the planning, the hopes, the ‘dipping into’, the teasing blurbs from the publisher, the cross-checks against reviews and what friends say – the social media of reading, which used to happen anyway before social media were invented. In the internet age these pleasures are, for me, both more available and intense. Perhaps, gentle reader, you are even now finding in this social medium a reflection of your own experience.

Any cross-connections between the books in the following list is both entirely accidental and entirely to be expected. As Virginia Woolf said in 1929 in A Room of One’s Own (New York: Harcourt Brace, 1989, p. 80), ‘Books continue each other in spite of our habit of judging them separately’; I thank her for letting me make her point simply by quoting her. This booky referencing/linking is just more noticeable in the age of the internet. Perhaps the facility of ‘search’ externalizes and mechanizes the connections, whereas the intractability of books requires us to hold our memories of them deep within ourselves.

So, to the twelve. With a nod to multimodality and inter-book connnectivity I have made some comments about the covers. Let me know if you disagree. 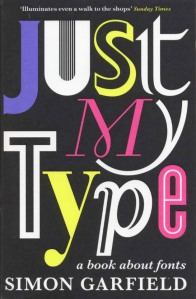 8 out of 10. Brash, populist, typographic – what else would have expressed the subject and title? The publisher and designer have done a good job.

1. Simon Garfield, Just My Type – this is a book of the stories behind the typefaces we all have seen and increasingly seem to know. It was the surprise UK bestseller of 2011, and shows – contrary to received wisdom about e-books – that people really do care about fonts.

5 out of 10. Attractive colour, but the effects are too subtle – I can just about see film and a schematic gramophone, but can anyone see the typewriter? The author’s ideas are bolder than this.

2. Friedrich Kittler, Gramophone, Film, Typewriter – Kittler is the successor to the startling media analysis of Marshall McLuhan, though this was also written just before (1986) the internet age. This one is an exciting kick-off for a new ‘books about books’ group in Cambridge starting next month. Book groups are both comparatively modern and an impressive example of an autonomous self-help and self-education initiative; they are also fun and friendly. I am tempted to suggest they are, perhaps, long-term, more interesting and important than the Occupy movement, which only has life because of the media attention from the conglomerates they purport to oppose.

1 out of 10. The print book is bright red. I know this is not intended to sell in a bookshop, but a good cover is an enjoyable and memorable exhibition of the black arts of publishing. The Kindle grey here is horrible, isn’t it?

3. Mark Forsyth’s The Etymologicon was my first Kindle book, now safely and enjoyably survived. The writing if not the device was an entertaining canter through some of the wormholes surprisingly connecting the words we use, for example caliphate to California. The brilliant linked-up narrative structure that ends back at the beginning is shared with other popular successes such as ‘On Ilkley Moor bartat’, Pulp Fiction and the cycle of readings  in the church year (the first sentence ever to link these together?). And any book that starts off by discussing metaphors of book has got to be good, in my book.

7 out of 10. Cool, intellectual and elegant, perhaps a little downbeat. Contrarational swirly smoke is lovely – is it information flow? Collective political consciousness?

4. Manuel Castells, Communication Power, is a major attempt to theorize the relations of media and power in our time. The author seeks to explain the causes of the uprisings in the Middle East and northern Africa in 2011; he goes on to suggest how the current power and communication matrix may affect power relations in the future. The author describes digital and smartphone media as ‘means of self-communication’ – which sounds rousingly controversial and an incitement to read.

Not assessed. This book is different. ’Bible black’ leather with elegant gold arabesque embossing. Designed to be held.

5. John Baskerville (printer), The Book of Common Prayer. This is the classic Church of England text, full of magnificent word music such as ‘the author of peace and lover of concord’, ‘the devices and desires of our own heart’, ‘till death us do part’: three of hundreds of phrases that have rolled around the backs and fronts of English minds since 1549 to intrigue and inspire. Published and printed in a particularly superb edition in 1760, I am writing more about this in the next post. 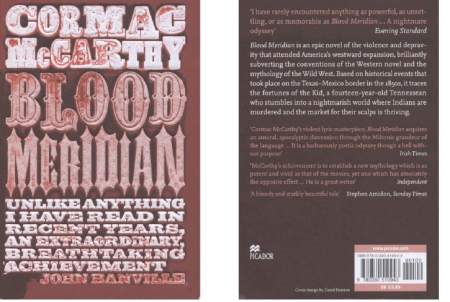 8 out of 10. Wonderful work from David Pearson. The combination of dried-blood colourways and heavily embossed tombstone/American Gothic typography (based on contemporaneous wood type) is a perfect visual correlative for the feel of the novel. At the same time the typographic design avoids crude pictorial literalism, which would subvert the author’s extraordinary cowboy-Miltonic prose framing of the violence. The heavy capitals of the Banville quote are perhaps just too much. The back cover typeface is PMN Caecilia, the same as used by Kindle. Is the designer playing a joke? Can designers make jokes on Kindle?

6. Cormac McCarthy, Blood Meridien, for my book group #1, is so far showing itself a tour de force of sickening narrative and textures of grit, rock and dust, lumped in with an aching lyricism in its descriptions of savage and inhospitable landscapes. A beautiful and disturbing existential masterpiece. 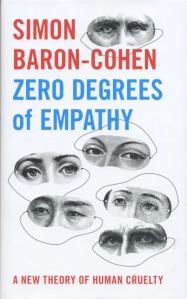 6 out of 10. Interesting to look at for 10 seconds, which is enough. Clear type, attractive to a general readership. I doubt whether the mask idea is really what the author means, and six of them is too much.

7. Simon Baron-Cohen’s Zero Degrees of Empathy is accessible academic-based writing published in a more populist way for what the business calls ‘the trade’. Written by a near neighbour, it sounds like an explanation of the behaviour of the people in #6 and will be read next. Incidentally, this is a signed copy – how do authors sign e-books?

3 out of 10. The type in the hedge is hard to read. The publisher has disrespectfully replaced the author’s first name with their own, thereby only reducing the value of their brand. Some of Cheever’s writing includes homoerotic themes but this image and treatment generally is glib veering to crass.

8. John Cheever, Collected Stories – making good on a promise in a previous post,

7 out of 10. The colours in John Piper’s image are rich and eye-catching. The elegant but perhaps over-traditional type is clean and clear, though I can’t see what the indent on the third and fourth lines actually means. Note that the matt lamination makes a rich black look grey compared with the sticker. The lamination transfers our attention (in bookshops) from the visual to the tactile, and calls us to pick the (heavy!) book up.

9. Frances Spalding’s John Piper Myfanwy Piper is the biography of two major forces in the British artistic avant-garde from the 1930s onwards. This is another signed copy. I don’t specifically collect signed books, but I like the physical expression of the individuality of the author. A writer’s quill is definitely archaic, but a pen seems natural; a signed book happily makes the metaphor literal.

8 out of 10. Isaacson has a story about this; the book was originally called ‘iSteve’ and a cover proofs showed a cutout of the young Jobs inside the bitten-apple logo. On seeing this, Jobs said Isaacson had no ******* taste and refused to have any more to do with it – unless he could take the book into the Apple design studio. How many authors get to do this? This cover (and title) is apparently the result of several weeks’ work there. The black, white and grey commands attention in any bookshop jumble of garish colour. Jobs’s aquiline stare is perhaps now uncomfortablly over-iconic, but this is an excellent commercial cover, and very expressive of the subject and (surprise, surprise) the company too.

10. Walter Isaacson, Steve Jobs – I’m sure you’ve seen copies everywhere. Through the crassest-possible eyes of a publisher the death of its subject could hardly have been more opportunely timed for publicity, but hype or no hype, this would be a fascinating read anyway.

6 out of 10. Why do the ‘new’ Spaniards have their colours and type looking like the prewar ones? Why the sub-Picasso picture, and why is sketch of the Bilbao Gehry gallery so crude? The yellow is fun, though, and the cover has the kind of energy that makes you think this will be a lively read.

11. John Hooper, The New Spaniards – a very well-reviewed present from one of my sons, who lives in Spain. A book is a door to any not-yet-known world.

6 out of 10. Bureaucratic subtitle clashes with the feel of the subject – doh! Added marks for punchy colours and a good attempt at humanizing abstraction, but minus marks for showing the ephemeral Grace Jones wearing annoying clothes.

I am most grateful to all my family for knowing me (or picking up my dropped hints) so well they hit my reading interests bullseye so often. Where the books are more tangential I thank them for broadening the gene pool of my stable of hobbyhorses.

The John Baskerville is so unusual I’ll write about it (with pictures) next time.

My Kindle (two words I have only fleetingly toyed with before 25 December) is perhaps the thirteenth fairy, the wicked one. Rather than refuse to invite her and banish Kindles from the kingdom for ever (with soporific consequences), I shall continue my discussion in the next post.

I’ve been working in book publishing for over 30 years – an industry now in rapid transition. So I’m interested in foundational principles for media, writing and language – what lessons can we learn for how we can and should communicate? How can we make sense of media/technology? Can we transfer some skills from the old to the new? I hope to share (every week-ish) some things I think are wonderful, rich and important. I write longish posts because our complex and fascinating world cannot be reduced to soundbites. Please let me know what you think – contact me at david@propagandum.com
View all posts by Propagandum →
This entry was posted in Business, Publishing and tagged Baskerville, Book cover design, Books, Castells, Cormac McCarthy, Kittler, Twelfth Night, Typography, Walter Isaacson. Bookmark the permalink.

2 Responses to The 12 books of Christmas