The power of words #1: words of power

Posted on 12 September 2011 by Propagandum

We cannot understand a word unless we know what it means, but our familiarity with it also wears away the meaning. This is the motor that drives the ceaseless creativity of our speech-acts. I started off making a selection of my favourite words but found these – all but one of which is on the Dark Side – more interesting and expressive, more complex and powerful. I apologize if any of these words are too strong. If language (including its commercial use) is ever to be more than a cosy and deadening repetition of what we know already, in the interests of creativity and psychic completeness we owe it to ourselves to take a look. (I have included some instances of visual power for multimodal counterpoint.)

Sarcasm is a truly horrible word and idea, deriving from two Greek words meaning ‘tearing of the flesh’ – compare the more exotic but effectively harmless metaphor of sarcophagus, literally ‘flesh-eating’. What is most ugly about sarcasm is the implied state of mind: it is the response of the powerless to the powerful, where the lie of deference makes a deliberately poor attempt at concealing the pleasure of attack. But the powerlessness is only in the mind of the sarcastor (so to speak), who in fact denies their own power and announces their preferred position: weakness. It takes a strong listener indeed to understand that the wounds they feel they have just received are a cry for pity and help.

It is often said we should avoid Latin- and Greek-based words when we write. Strunk and White (The Elements of Style, 4th edn, New York: Longman, 2000, p. 76) offer this good if folksy advice: ‘Do not be tempted by a twenty-dollar word when there is a ten-center handy, ready and able.’ But Latin words burn slowly and for a long time. So when Thomas Jefferson wrote that ‘the earth belongs in usufruct to the living’ (letter to James Madison, 6 September 1789) he gave us a concise and memorable phrase that is more resonant simply because the meaning is not immediately obvious. Clive James once said that he ‘turned a phrase until it catches the light’; usufruct fascinates our inner magpie, it is a word we take back to our preconsciousness to turn over repeatedly afterwards. Don’t we?

The abomination of desolation (Matthew 24:15–26 and elsewhere) is both Latinate and frightening. Latin is the language of magic, as J. K. Rowling’s accountant can tell you. But what does it mean? Roman armies around Jerusalem? A mistranslation of the Greek transliteration of the deliberately distorted Hebrew name of Beelzebub? These words scare us because here is a feeling without a clear correlate, an inner terror magnified, like homeopathy, by the dilution of the object. Even the ridiculous fibreglass shark in Jaws is scary before we see it. In C. S. Lewis’s The Magician’s Nephew Queen Jadis destroys all life on Charn but her own by uttering the Deplorable Word. What is it? We never know. We both want and don’t want to know. A curse indeed.

I am reluctant even to mention abortifacient because it connects – indeed disconnects – word to referent in a way that speaks – doesn’t speak? – of emotional emptiness. Yet lost somewhere in here are some of the deepest feelings of our humanity. I am not trying to take any position or tell anyone else what to feel. I’m not suggesting the elimination of the word itself – as if that would make anything better. I am sad simply because here is a word that says much about our responses to our human sorrows. 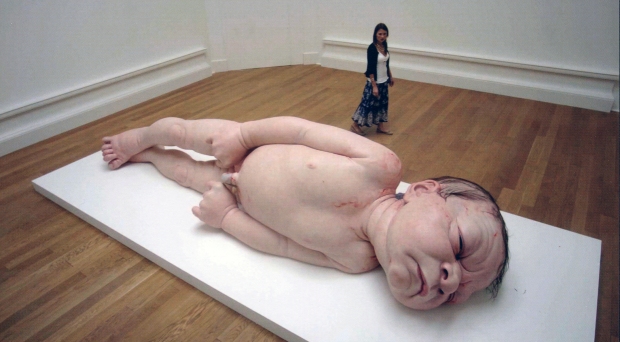 Ron Mueck, A Girl (2006) in the Royal Scottish Academy Building, Edinburgh, 2006. An exploration of the power of detail and scale

We all knew – unconsciously, yes – there was going to be banking crisis when we heard bankers say their financial positions were highly leveraged. (For full effect, the vowel of the first syllable has to be short, as in ‘beverage’.) Note first the passive voice, that wonderfully useful device to make human agency disappear: lo! there was an effect but no one made it happen. Note too the word was not levered (perhaps too understandable) but leveraged: fascinatingly meaningless and hypnotically distracting enough to crowbar our attention away from what they were saying. Real meaning? ‘We have borrowed much too much money.’ Embarrassment, fear or any other emotional response that says things are really out of our control can lead to evasion; in language they create euphemisms. Disastrously, this is what has happened here. I am not saying the word is ‘bad’; I am certainly not saying that rational or ‘correct’ word-formation principles would have prevented the banking crisis. I am saying there is rich meaning in everything we all say, and I would like to be more aware of it. Beyond this, I am also trying to imagine that the effort to make sense is a door into a better world.

At the risk of inviting terrorists of international boredom and non-creativity in through the front door, armed with expletives, does anybody have any words of power they want to post as comments?

I’ve been working in book publishing for over 30 years – an industry now in rapid transition. So I’m interested in foundational principles for media, writing and language – what lessons can we learn for how we can and should communicate? How can we make sense of media/technology? Can we transfer some skills from the old to the new? I hope to share (every week-ish) some things I think are wonderful, rich and important. I write longish posts because our complex and fascinating world cannot be reduced to soundbites. Please let me know what you think – contact me at david@propagandum.com
View all posts by Propagandum →
This entry was posted in Words and tagged Creativity, Meaning, Words. Bookmark the permalink.

4 Responses to The power of words #1: words of power